On Monday I went up to visit my parents. On the drive back to the train station, my mom told me that she’d had a super awkward conversation over dinner with old friends. The people she was eating dinner with brought up a guy they knew who had passed away in a car accident some years back. In the conversation, they remembered him being “a great guy” with a “great laugh.”

Mom brought the conversation to a screeching halt with two small sentences:

“Yea, such a great guy. You know he used to beat the hell out of his wife?”

After that, things got weird and awkward. Other people in the conversation called the woman in question “mouthy” and said that it wasn’t a coincidence that every man she’d been in a relationship with had beaten her. Mom cited repetition compulsion and that being “mouthy” (whatever that fucking means) is never an acceptable justification for abuse.

Mom felt super awkward about the conversation, but I was so proud of her! Feminist killjoy moments like that make me so happy I just have to Tweet about them.

Apparently my mom called out rape culture I’m a huge way at a dinner this week with old friends. Feminist mom FTW!

When I told my mom that the conversation was an awesome feminist moment and how thrilled I was that she had opened up like that and corrected the other people in the conversation, her response was to say that she doesn’t “identify as feminist,” but rather as a “humanist.”

At which point I just wanted to put my head in my hands and rub my face with frustration.

I had some serious learning and growing to do.

The first thing that I had to learn is that humanism is already it’s own thing. Humanism is chiefly the belief that humans have no need of supernatural powers to solve their problems. The American Humanist Association defines humanism as having numerous meanings depending on what exactly you are speaking about. Literary humanism differs from religious humanism, for example. They define Modern Humanism as:

“…a naturalistic philosophy that rejects all supernaturalism and relies primarily upon reason and science, democracy and human compassion.”

It should be noted that modern humanism grapples with whether or not it should be defined religiously or secularly. I, personally am a secular Humanist. I’m basically an atheist and I truly do believe that humans have the potential to rationally sort out their own problems. With that said, my humanism and my feminism are distinctly separate beliefs that inform one another. 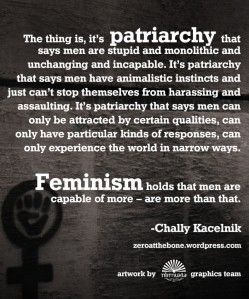 My understanding of feminism was fundamentally changed when I re-framed it as a resistance to – and revolution against – the patriarchal ideals which inform our society. I realized that men were very much included in feminism when I learned about things like toxic masculinity and started to think about how the roles and responsibilities that we apply to the fantasy that is the gender binary hurt people all along the sex and gender spectrum.

My world was further opened when I found myself interacting with intersectional feminists and discovered that my feminism could include not only all genders and sexual identities, but also people of other races and other issues of social justice. Of course, this portion of my feminism meant I got called out a lot on my white feminism and my ignorance when it came to issues of trans inclusivity, which was incredibly awkward for me at the time.

The point of all of this is to say that feminism and humanism are not the same. But even more than that, feminism includes men and women and trans folk. It includes people of all colors, sizes and sexual identities. And if you meet someone who calls themselves a feminist and doesn’t actually include all of those things? Then they are not really feminists. Feminism is either intersectional or bullshit. One of those two things. But that is an issue for another blog.